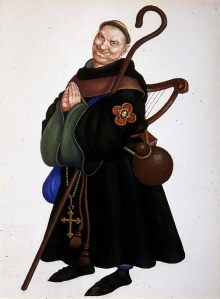 “Listen! O my son, to the teachings of your master, and turn to them with the ear of your heart, willingly accept the advice of a devoted father, indeed act upon it!”

“Thus you will return by the labour of obedience to the one from whom you drifted through the inertia of disobedience, St. Gove be praised!”

T’is Spring and Father Anacletus thinks that the vast metropolis that is London, seems so much darker, pungent and, putrid,so much more depraved than is normally the case. The Brotherhood of St Gove Imperator Angelorum, has convened for the service of Compline, at the newly annexed parish church of St Tobias-in-the-North. A new Chaplain has been installed,and with the aid and succour of members of the order of St. Gove,they have funded the construction of  another Imperator Angelorum Industrial School. Five hundred supplicants alone are immersed in the testimonies of Gove and the virtues of labour for labour’s sake. And their numbers are growing, soon, all of London will embrace the Industrial School revolution, the beneficent gift of the Goveen Brotherhood.

Lifting up his work worn hands and raising his heavy lids towards the rafters of the humble chapel, Father Anacletus offers up the following prayer.”Sanctify, oh sanctify us, to thy purposes Lord Gove. As we restore unto this empire the very days of thy perfection, when man frolicked midst the gardens of paradise, wherein all knew their place in the scheme of things. Oh Lord Gove, in thy flawless altruism, grant us an unblemished revelation of thy ways. And grant us, pray grant us fresh and bounteous visions of thy intent. Hear this, my prayer St.Gove!”

Father Anacletus slowly lowers his hands to his sides and turning his palms downwards proffers a blessing on the gathered congregation. He scrutinises the monks and priests who stand before him, all deep in prayer and all with their eyes upturned toward the statue of St.Gove. All except the Reverend Arthur Farquar who is looking deeply troubled. Turning his palm upwards Father Anacletus catches his eye and beckons him forward. The Reverend Farquar pales, but since none dare decline an order of the sainted Father, he tiptoes hesitantly down the aisle.”Go my brothers” the sainted father chants in a sing-song voice.”Go my brothers! And may joy surround you, as you teach the testimonies of sweet Gove!”

The humble chapel like most places graced by the presence of the Goveen Brotherhood has taken on a much lighter aspect. The marble altar sparkles and glitters in the cold morning light. The new installed stained glass windows shower the grey stone columns with a kaleidoscope of bright colours. There is an air of freshness, of newness which that place has not seen in centuries. And yet even Arthur is disturbed by what has most recently transpired.”Speak my son speak” urges the gentle father once the very last of his supplicants has departed the chapel,”What ails you?”.

“T’is the appointment of the Reverend Farthengrodden Father, I am most perturbed by it”.

“Why pray tell?” asks the sainted father with a smile,

“T’is not my place to vaunt corrupting gossip, but, he has been suspected  of murder Father!”

“But, he has been acquitted Reverend” replies the sainted father calmly.

“I know father, but he has been most recently brought before the Bow Street Magistrate, for the embezzlement of work house funds”.

Father Anacletes smiles benignly and makes his reply,”He was acquitted of that also my son. Do you doubt the wisdom of the Goveen Brotherhood in appointing him Principal of the new industrial school?” placing a warm hand on the sleeve of Arthur Farquar’s robes he looks up into his face wise owl that he is and smiles.” My dear child, his family have been great benefactors to our cause for many, many, years. Pray tell, is thy old headmaster still resident at Bethlem Asylum?”

The Reverend Farquar blushes and nods, Father Anacletes continues,”And Master Parnham, how is he?” now Arthur’s face grows pale for t’is well known that since the burning down of Ravens Industrial School and the murder of his daughter, Master Parnham has fallen (direly) to drink.

“Whereas you dear Arthur go from strength to strength a giant amongst maggots! The Reverend Farthengrodden has fallen down before the feet of the brotherhood, confessed his sins and bitterly repented of them. He has left off all profane associations and now resides at the Imperatur Angelorum Monastery. He is a brand plucked from the burning, you need have no worries so far as he is concerned.”

Arthur Farquar is mortified, is the burning stench of Raven’s Industrial School never to leave him? “Tell me how goes it with your congregation? I’ve heard tell they struggle to embrace the ways of Gove”. Heard tell? Who could possibly have tiptoed off and told him? Reverend Farquar pales even further, he looks as though he might faint,”I am told that you have had considerable difficulty reining in Master Liquorish’s taste for the old religion“.

“Indeed?” Reverend Farquar strives desperately to affect an air of outward serenity. “T’is feared he may never leave his bed, in fact it is rumoured that he has had the last rites read over him, by the former priest of this parish naturally”.

Having his competency queried the Reverend Farquar lacks the confidence to suggest a replacement for the dying man and so he asks timidly,”Who is to take his place as church warden and treasurer?”

“Why who else?” responds the sainted father with a triumphant smile,”Reverend Farthengrodden!”