“I dare say Jonas, that you find my behaviour squalid and tawdry, that you feel as though you’ve entered a light-less region far, far, away from the innocence of British Civilisation.” I made no reply to this, for, dear reader, how may respond to such a one, who, having brazenly discarded all things Christian, avows that he has done so for a higher purpose? What greater purpose could there be in savage hinterlands such as this, than dauntless and unflinching service to that imperious empire led by our great and glorious queen?

“Look at them Jonas! Look at these artless innocents and consider whether it is better to have followed the imperial edicts of Umbongo Umbongo and the British Empire or do as I have done! These are children freed! Freed! From years of enslavement to the vulgar business of Ivory harvesting! Freed! From miserable, crushing enslavement to the overweening hubris of empire! Freed and free to twerk!”

Equatorial winds whistled through the palm trees around us and as if in response the palm frond skirt tied around his waist rustled. Professor Powell swayed his hips gently in time to music he alone could hear. I must confess that even though the twerking fantasia had abated, a distinct feeling of nausea overcame me at the sight of him performing that torrid native dance with a look of ecstasy upon his face.

I felt myself encompassed by a dark, cabalistic silence in that stifling, steaming place. Torches soaked in elephant fat, and then set alight, surrounded us on every side, their barbarous glow drenched the Umbongoan natives who surrounded us in scarlet and orange light, so that they seemed more savage looking than usual.

“The worker deserves his hire Jonas, but these my poor, poor, infants” he gestured grandly towards the Umbongoan Natives “Have received not so much as a sovereign from the grandiose empire! Oh but we shall have what’s ours despite them!”. Professor Powell’s eyes blazed with a degree of monomanic malevolence that I thought most imprudent in one who had taken the British Empire’s many sovereigns, along with an oath (most passionately given I might add), to do his duty by queen and country.

How may I describe the hideous cries that broke unbidden from my lips at the sight of so many crippled! For where there should have been two arms there was only one, and where two legs had been, one leg and a pair of wooden crutches sufficed! Who had been the author of these unspeakable villainies?”.

“But this is not a British practice!” cried Captain Dunrudy,”T’is a Belgian aberration! You cannot hold the British Empire to blame for this surely?!”. Oh that Captain Dunrudy had kept his mouth shut! For at his utterances Professor Powell’s face reddened with anger and his eyes gleamed with a most unnatural light.

“Before the advent of the British Empire the Nederhiwi numbered two thousand. All that remains of the Nederhiwi now is what you see here, some one hundred and fifty souls gifted to me by the Goddess Umgowah! Of these some sixty have been mutilated, mutilated in punishment for not meeting the Imperial Administrator’s yearly quotas for Ivory! ”

. Oh grotesque horror of horrors! What monstrous lunacy was it that forced civilised men to resort to such practices? To leave off worshipping Jehovah and to bow one’s educated brow to heathen practices and a heathen goddess! To dress like a native and resolutely take up the cause of a foreign and barbarous race! Reeling back in disgust I caught hold of Pasher Arshad by the arm, but his ashen face offered me no reassurance, his right hand firmly wrapped around his prayer beads he shook his head sorrowfully. “To put one’s hand in the mouth of the British lion” he grimly declared, “and then to thump it righteously on the head is not a good idea Professor Powell Saab! Compassion and mercy are most glorious things, if one is alive to appreciate them! But the empire is a mighty, ravenous, beast which none have stood against for good reason! We are all doomed! You have brought the taint of death and destruction down upon all our heads! It is like Khartoum under General Gordon Pasha all over again!”.

Oh terror upon terror! The Professor was flirting with immense forces far more powerful than himself, heinous forces that would have him court-marshalled and hung! Yet still he was defiant,”Doomed?” he cried looking around at his children who grimaced reassuringly back “Doomed? We children of the Goddess Umgawah have freed ourselves and we will not be subjugated again! The lioness of Britannia is unassailable you say? Do not think that we stand alone in our virulent dislike of the empire! Why even now the Wahiri Hiri and the Barbary Corsairs march towards our glorious outpost! We shall join arms with them and together we shall bring down that nefarious imperial beast! If they will not free us we shall free ourselves! Umtargatie victoree! Victoree!” shrieked he,

“Dear God he’ll kill us all!” declared Captain Dunrudy reaching for his hip flask, which fortunately for us Pasher Arshad had confiscated,”Moribund moribund tee tee!” declared he upon finding that his flask was missing. “Moribund gazulu tee tee!” I replied, for few had passed through such a fiery trial as our own! 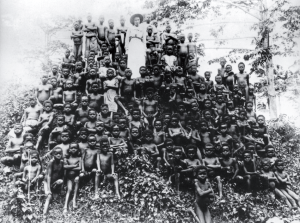