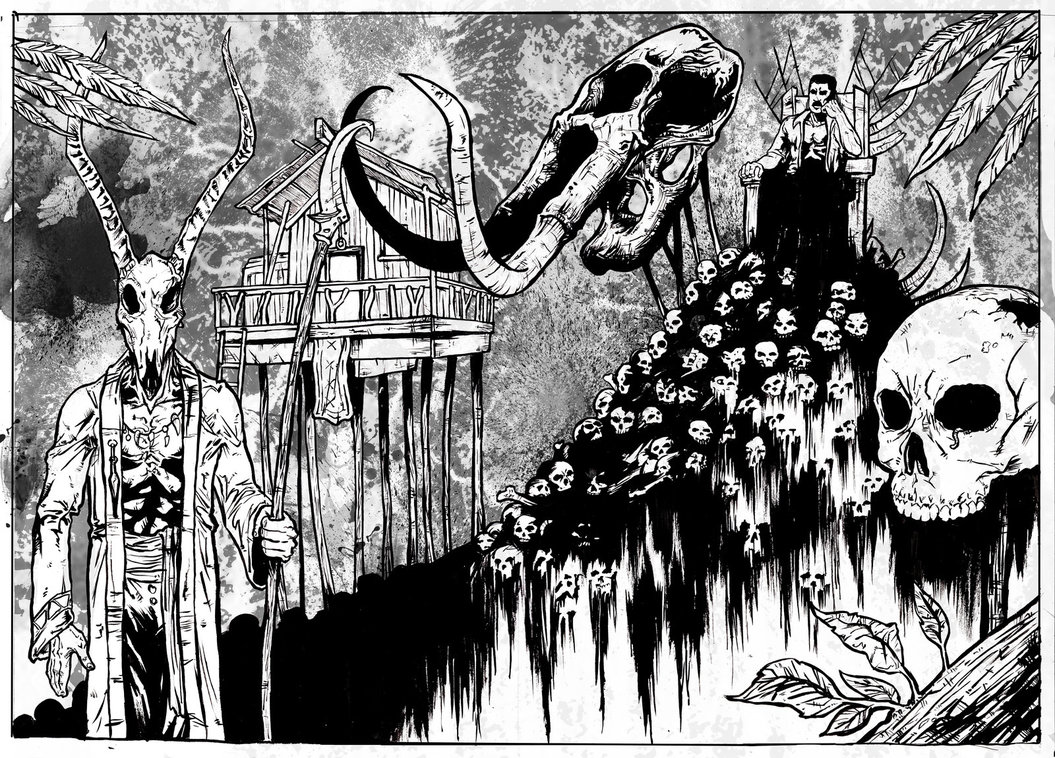 The day would have begun serenely were it not for the throbbing drums below us and the low, ominous mutterings of the natives. T’was a fitful night we spent, slumbering in the low grass, whilst grasshoppers chittered and Pashar Arshad kept watch through the night. T’was an unrelentingly ominous yet sunny day we found ourselves awaking to. I could not help but to recollect Pashar Arshad’s reminisces about the fall of the heroic city of Khartoum to the massacring Mohammedan hordes of the Mahdi;it had been a scorchingly hot day then too, Pashar assured me. Looking up into the vast empty soul-less sky I cursed the gods that had trapped us between the roaring waters of the Luabalaba and the Nederhiwi Ivory Station. Not for the first time I questioned what dark primeval forces had lured me out of merry old England during cricket season and into the darkest reaches of dimmest Africa. Why on such a morn as this, I should have been drinking chocolate out of a delicate china cup and slowly devouring a plate of Turkey Twizzler Kedgeree.

“Oi oi!” cried Captain Dunrudy “There’s movement down below! The gates are being opened, somebody’s coming out!” I looked down upon the Irish man who had crawled halfway down the hill on his belly with a cigarillo dangling from his lips and a telescope extended in front of him. His begrimed britches were partially split around the back, so that the stark white linen of his undergarments shone through, as he wriggled farther down the hill to get a closer look. “Oh ho! It’s a party of natives and that looks like-is that Professor Powell?!” he handed the telescope to me and as I looked a gasp of unsuppressed horror escaped me.

The burnt low grass scratched my cheeks, and tickled my lips, as I wriggled still further down the hill to more closely view what Africa had wrought upon this once civilised Englishman. For it was clear to me that the most esteemed Professor Powell had gone native. Here was an Englishman-who had been the founder of the New College Drinking Club, a fellow of the Royal Archaeological Society and a lay preacher at Canterbury Cathedral-clad in a grass skirt, fashioned it appeared from Palm fronds. Elephant tusks had been tied to either side of his head beneath a crown of Hysterius Ukippus feathers. Gold and Ivory bracelets adorned his wrists, his chest alone was bare and tanned as dark as a beech-nut.

“Oi oi! He’s addressing the Kon-Kon-Safwo’s with dance! He’s clearly gawn bonkers!” exclaimed Captain Dunrudy disbelievingly as he crawled still further down the steep stark hill with us crawling along behind him. The drumming had increased in intensity as the Kon-Kon-Safwo-Redwoods shimmied and shook in time to its rhythm. Not to be outdone in aggressive ferocity, Professor Powell shimmied and shook his own lean body with twice the speed and ferocity.

He twisted, he leapt, he skipped ferociously in a circle with a band of similarly garbed Umbongo Umbongoans dancing sombrely beside him. It seemed to me that some unearthly discourse was taking place, one such as no civilised Englishman could possibly comprehend. Even as we had travelled inland from the outer regions of Umbongo Umbongo we had heard rumours of the godless depths to which he (Professor Powell) had plummeted. The devilish rites to which it was rumoured he had been party, but I had not thought to witness a display so swinishly heathen, for he grimaced and rolled his eyes back in his head broodingly as though he were Umbongoan born and bred, twirling the ivory handled fly swatters in his swarthy hands with joyous abandon.

“Have you visited the Kalahari desert?” whispered Pashar Arshad ” The Bushmen of the Kalahari perform such heathen feats as these, they call it ‘ungah-wiri’ “

“Tis the Umtargatie-Yaw-Yaw” replied Captain Dunrudy chuckling quietly to himself as he watched the good professor performing a bellicose strutting skip with his sunburned paunch thrust out, and his hands jerking spasmodically at his sides. “The Professor is attempting to perform the Umtargatie-Yaw-Yaw, tis the tribal way of marking out one’s territorial boundaries”

“By God! He’s an Englishman! Can he not simply have the brutes shot and mark out his territorial boundaries that way?” I exclaimed in horror. The Kon-Kon-Safwo-Redwoods seemed terribly excited by the presence of an Englishman in their midst, for the drum beat picked up its pace and now the brutes shook their spears and their grass skirts savagely, so savagely that the grotesque little shrunken German heads attached to them bobbed up and down.

“Ooooh that don’t look good. If they keep that up he will have to shoot them.” observed Captain Dunrudy uncapping his flask and knocking back a long hard slug of whisky.”Still” he continued, “his loss will be our gain; them gates to the outpost are wide open”. Death lay skulking in the air and if we were not careful it would eat its fill of us,the wide open gates were akin to a luminous flash of hope in that heathen darkness.

Conferring quietly with Pashar Ashad (who in turn instructed the head native-porter) I unholstered my pistol and crawling deeper into the low grass, I made my way carefully downhill. Sweat trickled down my face and neck staining my only remaining pure white bespoke shirt. The ground beneath my dirty fingernails throbbed savagely with the frenzied thud of savage feet on the sun-baked, my head ached so fiercely from the searing heat that I feared I would betray my Britishness by swooning. Still, I made my way onwards, wriggling along the stony ground on my belly till at length I was at the gates of that sparkling sanctuary from barbarism, the Nederhiwi Ivory Station ………